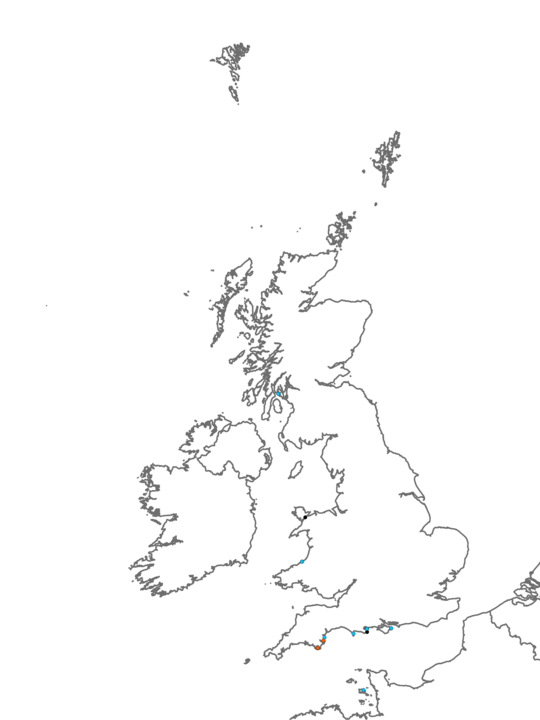 Mixed substrata from the sublittoral fringe to 5m below chart datum dominated by the brown seaweed Sargassum muticum. This invasive non-native brown seaweed can form a dense canopy on areas of mixed substrata (typically 0-10% bedrock on 90-100% sandy sediment). The substrate on which this S. muticum-dominated community is able to develop is highly variable, but particularly prevalent on broken rock and pebbles anchored in sandy sediment. The pebbles, cobbles and broken bedrock provide a substrate for alga such as the kelp Laminaria saccharina. During the spring, S. muticum has large quantities of epiphytic ectocarpales and may also support some epifauna e.g. the hydroid Obelia geniculata commonly found on kelp. The brown seaweed Chorda filum, which thrives well on these mixed substrata, is also commonly found with S. muticum during the summer months. In Strangford Lough, where this biotope occurs, the amphipod Dexamine spinosa has been recorded to dominate the epiphytic fauna (this is known to be commonly found in Zostera spp. beds). S. muticum is also found on hard, bedrock substrates within L. saccharina canopies. S. muticum plants on hard substrate area, under a dense L. saccharina canopy, are typically smaller and at a much lower density, especially where a lush, under-storey exists with red seaweeds such as Ceramium nodolosum, Gracilaria gracilis, Chylocladia verticillata, Pterosiphonia plumula and Polysiphonia elongata and the green seaweeds Cladophora sp., Ulva lactuca and Bryopsis plumosa. The anthozoan Anemonia viridis and the crab Necora puber can be present. More information is necessary to validate this description.

Where there is a greater proportion of bedrock or boulders (15-100%) L. saccharina will typically dominate the canopy. Areas with pebble cover on a hard substrate are colonised by S. muticum, but individuals quickly become peripatetic and are lost.