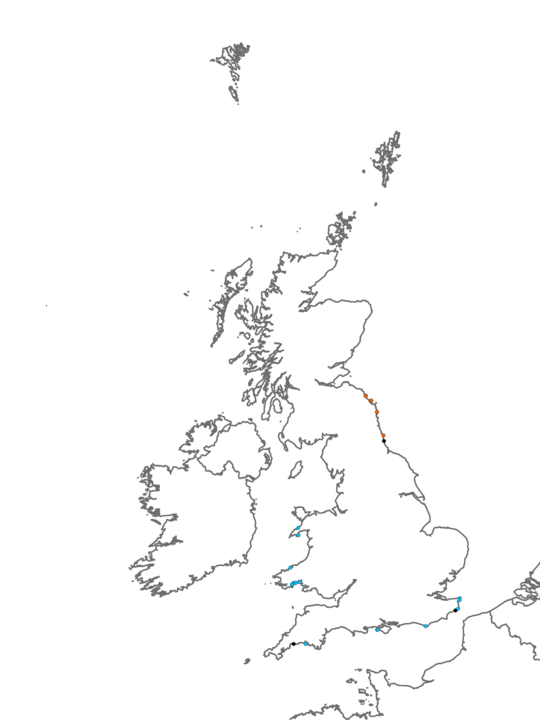 Vertical and steeply-sloping upper walls at the entrances and inner reaches of upper to mid-shore caves that are partially sheltered from direct wave action characterised by a turf of the 'velvety' red seaweed Audouinella purpurea. Patches of green filamentous seaweed Cladophora rupestris can be present. The fauna is generally limited to limpets Patella spp., the winkle Littorina saxatilis and the barnacle Semibalanus balanoides, while they usually occur in low abundance. Filamentous or crust forming brown seaweeds may occur mixed with A. purpurea, often becoming a zone in its own right (AudPil) above the AudCrup biotope. Other shade-tolerant red seaweed such as Catenella caespitosa and Lomentaria articulata may occur (but at lower abundance), and where freshwater seepage occurs, Enteromorpha intestinalis can form patches. Some variation in the species composition of the individual caves must be expected depending on local conditions. A. purpurea can be the only seaweed present in caves on the Thanet coast in south-east England. This biotope is known to occur in hard rock caves in north-east England and chalk caves in south-east England. Received after deadline: A. purpurea has changed name to Rhodochorton purpurea.

In hard rock caves, this biotope is generally found on the upper walls above the ScrFa and FaCr biotopes and beneath the biotopes dominated by green and/or brown crusts (GCv; AudPil). In chalk caves, AudCrup may cover the lower and upper walls, while it is usually found below GCv and/or AudPil.

The turf-forming red seaweed Audouinella spp. can be present though not at a high abundance. The red crust Hildenbrandia rubra is present.