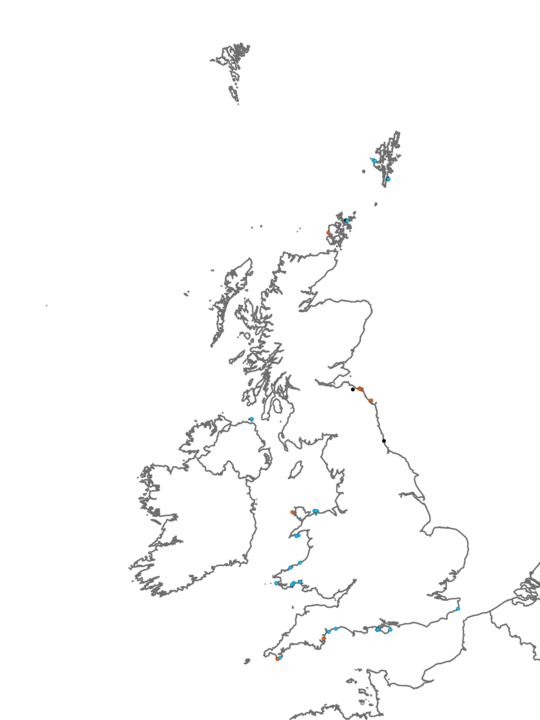 The upper walls and ceilings of the entrances and inner reaches of upper shore caves affected by direct wave action (and therefore moistened by sea spray), characterised by a mosaic of the olive green lichen Verrucaria mucosa and the non-calcified encrusting red alga Hildenbrandia rubra. The black lichen Verrucaria maura and red coralline algae can be present, though not dominating. The fauna in these upper shore caves is generally limited, due to problems of desiccation. However, where conditions remain sufficiently moist, and particularly in crevices and fissures, the barnacle Semibalanus balanoides, the limpet Patella vulgata and winkles Littorina saxatilis may occur, particularly towards the rear of the cave. Although the characterising species of this biotope also occur on the shore, they do not generally occur in a distinct band other than in moist dark caves. The turf-forming red seaweed Audouinella purpurea may occasionally occur in low abundance (where A. purpurea covers an extensive area, generally on softer rock such as chalk, the biotope should be recorded as AudCla).

VmucHil generally occurs on upper walls and ceilings towards the rear of dark, moist caves, but can also occur at cave entrances that are directly affected by sea-spray. Where VmucHil occurs at cave entrances and to approximately 5 m into the cave, it is usually found above a zone of Sem and below GCv or AudCla. Further into the cave Sem is replaced completely by VmucHil. There are no records for VmucHil in soft rock caves.