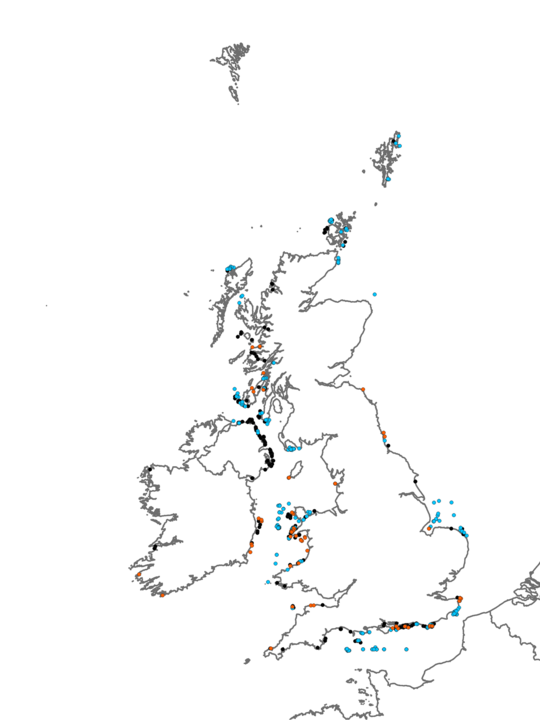 This biotope represents part of a transition between sand-scoured circalittoral rock where the epifauna is conspicuous enough to be considered as a biotope and a sediment biotope where an infaunal sample is required to characterise it and is possibly best considered an epibiotic overlay. Flustra foliacea and the hydroid Hydrallmania falcata characterise this biotope; lesser amounts of other hydroids such as Sertularia argentea, Nemertesia antennina and occasionally Nemertesia ramose, occur where suitably stable hard substrata is found. The anemone Urticina feline and the soft coral Alcyonium digitatum may also characterise this biotope. Barnacles Balanus crenatus and tube worms Spirobranchus triqueter may be present and the robust bryozoans Alcyonidium diaphanum and Vesicularia spinosa appear amongst the hydroids at a few sites. Sabella pavonina and Lanice conchilega may be occasionally found in the coarse sediment around the stones. In shallower (i.e. upper circalittoral) examples of this biotope scour-tolerant robust red algae such as Polysiphonia nigrescens, Calliblepharis spp. and Gracilaria gracilis are found. In offshore areas, such as in the Greater Gabbard North Sea Area, where there is circalottoral mixed sediment, with pebbles and gravels, the biotope may further support rich encrusting fauna, including bryozoans, Spirobranchus lamarcki, and the barnacle Verruca stroemia, and occasionally Sabellaria spinulosa. Alongside these encrusting fauna, infauna such as Lumbrinerids (Hilbigneris gracilis), Glycera lapidum, Echinocyamus pusillus, Amphipholis squamata, Caulleriella alata may be present, and may represent a transitionary form between SS.SMx.CMx.FluHyd and SS.SCS.CCS.MedLumVen.

This biotope is found around most coasts, although regional differences are seen where one or two similarly scour-tolerant species such as Styela clava and Crepidula fornicata (Solent) occupy the hard substrata. Further offshore in the North Sea Flustra foliacea is less dominant and a hydroid turf and encrusting species more prevalent.

On pebble plains, as tidal stream strength increases to a point at which the stones are regularly mobilised, all hydroids are scoured off leaving just Spirobranchus, bryozoan crusts, Balanus crenatus and coralline algae.

SS.SMx.IMx.CreAsAn is found in shallower water in slightly less exposed areas with a lower proportion of cobbles and pebbles and in slightly weaker currents.