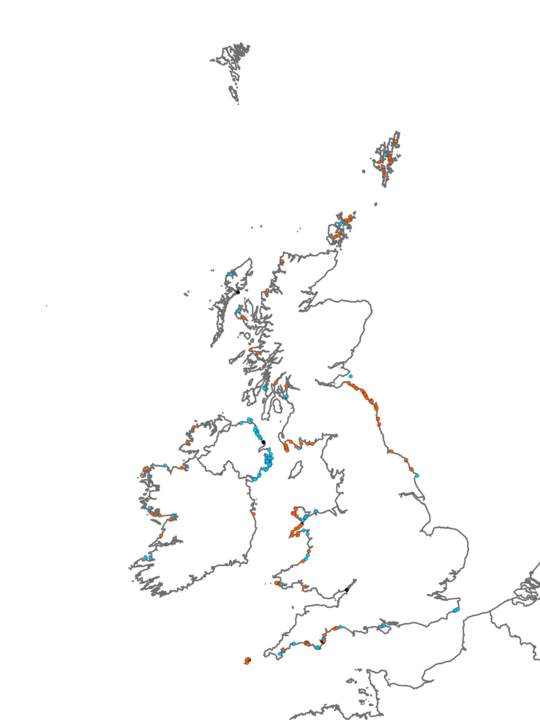 Exposed to moderalety exposed lower eulittoral boulders with the wrack Fucus serratus community of a high species richness as the presence of the boulders increases the micro-habitat diversity. The upper surfaces of the boulders are colonised by a very similar fauna to the other F. serratus biotopes, including species such as the limpet Patella vulgata, the whelk Nucella lapillus, the anemone Actinia equina and the barnacle Semibalanus balanoides. The shaded sides of the boulders are, depending on environmental conditions, often colonised by a variety of foliose red seaweeds, including Mastocarpus stellatus, Lomentaria articulata, Osmundea pinnatifida, Palmaria palmata and Chondrus crispus. Coralline algae such as Corallina officinalis and coraline crusts, as well as the green seaweeds Ulva intestinalis and Ulva lactuca, can be found underneath the F. serratus canopy or in patches on the boulders. The species composition underneath the boulders varies considerably depending on the underlying substratum. On muddy shores the fauna living under the boulders may be limited to a few infaunal species, such as the polychaete Cirratulus cirratus. Where more space is available beneath the boulders there may be a rich assemblage of animals. Characteristic mobile species include the crabs Porcellana platycheles and Carcinus maenas. Also present on and beneath the boulders are the tube-forming polychaete Spirobranchus triqueter, spirorbid polychaetes and a few winkles such as Littorina and Littorina littorea or even the top shell Steromphala cineraria. Encrusting colonies of the sponge Halichondria panicea are also typical of the undersides of boulders, while the hydroid Dynamena pumila colonies can be found on the F. serratus fronds. The richest examples of this biotope also contain a variety of brittlestars, ascidians and small hydroids.

This biotope usually occurs immediately below a Fucus vesiculosus-barnacle mosaic (FvesB) on moderately exposed shores or a dense canopy of F. vesiculosus (Fves) or Ascophyllum nodosum (Asc.FS) on sheltered shores. The sublittoral fringe below on moderately exposed shores is dominated by the kelp Laminaria digitata (Ldig; Ldig.LdigBo), while the kelp Saccharina latissima may co-dominate on sheltered shores (Lsac.Ldig; Lsac.Ft). Low abundance of these kelp may also occur in this biotope.

Occurs on bedrock rather than boulders. The species diversity and abundance of red seaweeds is higher, whilst the faunal component is less diverse due to the lack of micro-habitats. Mobile species such as the crabs Porcellana platycheles and Cancer pagurus and the starfish Asterias rubens are usually not present.

Occurs on bedrock rather than boulders. Has a lower species richness and the abundance of many species are lower. Mobile species such as the crabs Porcellana platycheles and Cancer pagurus and the starfish Asterias rubens are usually not present.

Occurs on bedrock and boulders in very sheltered conditions. It also has a very high species diversity and sponges such as Halichondria panicea and Hymeniacidon perlevis and bryozoans such as Electra pilosa or Alcyonidium gelatinosum are characteristic for this tide-swept biotope.

Occurs on variable salinity lower eulittoral bedrock and boulders. The individual M. edulis is large and the barnacle Austrominius modestus can be present in high numbers. Sponges such as Halichondria panicea and red seaweeds such as Lomentaria articulata or Chondrus crispus are not present. 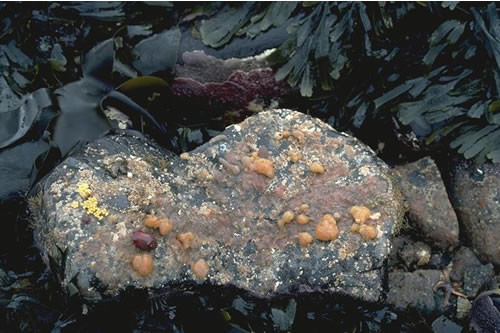 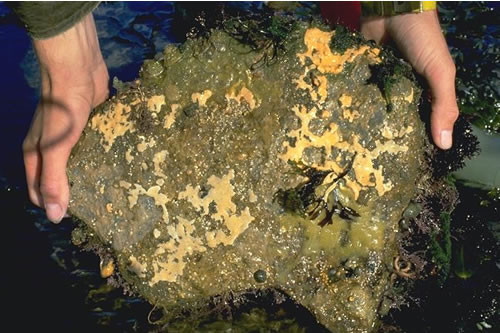 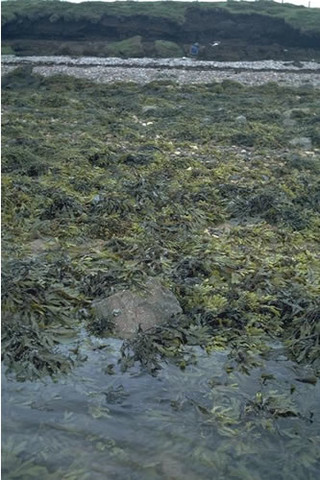