Circalittoral rock (and other hard substrata) 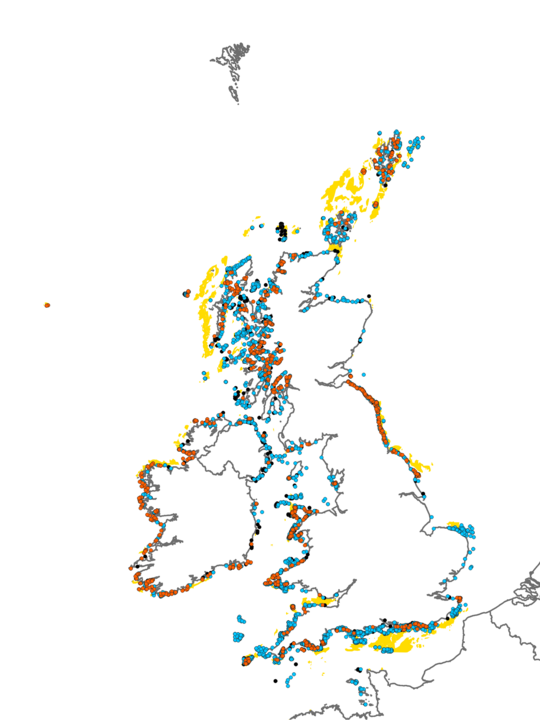 Circalittoral rock is present all around the coast of the United Kingdom, and is characterised by animal dominated communities (a departure from the algae dominated communities in the infralittoral zone). The circalittoral zone can itself be split into two sub-zones; upper circalittoral (foliose red algae present) and lower circalittoral (foliose red algae absent). The depth at which the circalittoral zone begins is directly dependent on the intensity of light reaching the seabed; in highly turbid conditions, the circalittoral zone may begin just below water level at mean low water springs (MLWS). The biotopes identified in the field can be broadly assigned to one of three energy level categories: high, moderate and low energy circalittoral rock (used to define the habitat complex level). The character of the fauna varies enormously and is affected mainly by wave action, tidal stream strength, salinity, turbidity, the degree of scouring and rock topography. It is typical for the community not to be dominated by single species, as is common in shore and infralittoral habitats, but rather comprise a mosaic of species. This, coupled with the range of influencing factors, makes circalittoral rock a difficult area to satisfactorily classify; particular care should therefore be taken in matching species and habitat data to the classification.