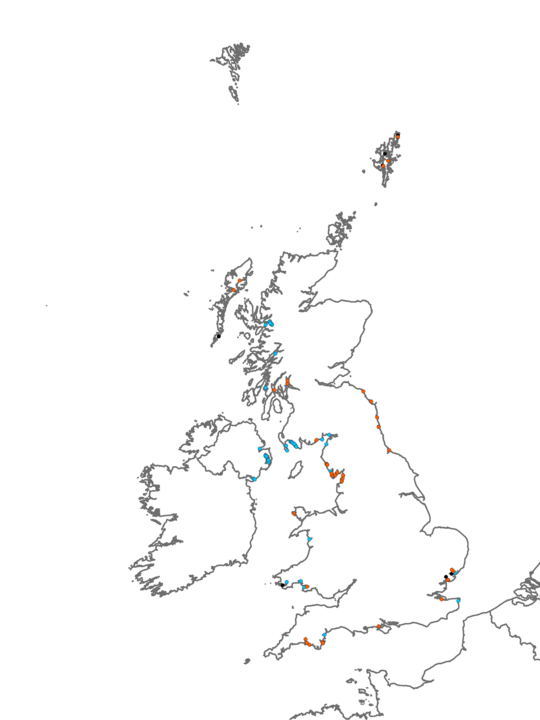 The eulittoral zone, particularly the mid shore zone, of sheltered to extremely sheltered mixed substrata shores is often characterised by flat banks or scards of cobbles and pebbles (on sediment) which are either too small or unstable to support a seaweed community. The boulders and larger cobbles are usually colonised by the barnacles Semibalanus balanoides or in areas with variable salinity Austrominius modestus and often dense aggregations of the winkles Littorina littorea and Littorina saxatilis are present as well. Between the cobbles and pebbles the mussel Mytilus edulis occasionally occurs, but always at low abundance. Juvenile crabs Carcinus maenas and gammarids may occur between and underneath the pebbles and cobbles. Brown seaweeds are rare, although the wrack Fucus vesiculosus may occasionally occur on larger cobbles and small boulders in the mid and upper shore zones. Ephemeral green seaweeds such as Ulva intestinalis may also be present. Shallow pools and patches of standing water may occur in low-lying areas and may contain amphipods and filamentous green seaweeds. Due to the unstable nature of the substratum the diversity and density of flora and fauna is characteristically low.

This biotope is found primarily on enclosed (estuarine) stony shores in wave-sheltered conditions (compare with Sem.LlitX) and may be subject to variable levels of salinity. It is found predominately in the mid shore zone below or at the same level as the biotope dominated by ephemeral green seaweeds (EphX). If it is found in the upper shore region it can be backed by salt marsh species such as Salacornia and Spartina sp. Below are biotopes dominated by the wracks Fucus serratus or F. vesiculosus (Fserr.X; Fves.X).

Found on more exposed, open coast sites, but with similar substrata. It is more species rich than LR.FLR.Eph.BLitX, and red seaweeds including coralline crusts, Mastocarpus stellatus and Chondrus crispus are present. There is also a higher abundance of the limpet Patella vulgata and S. balanoides.

Occurs in a wider exposure range and similar physical conditions. It has a higher abundance of green seaweeds such as Ulva spp. and Ulva lactuca and a lower abundance and frequency of occurrence of barnacles. Verylow species diversity. 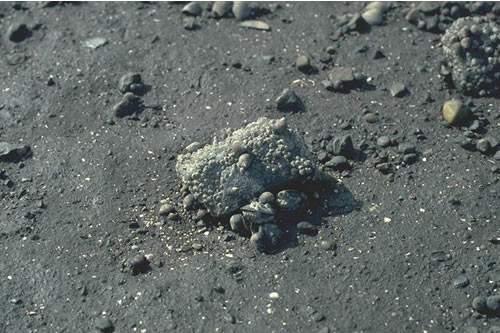